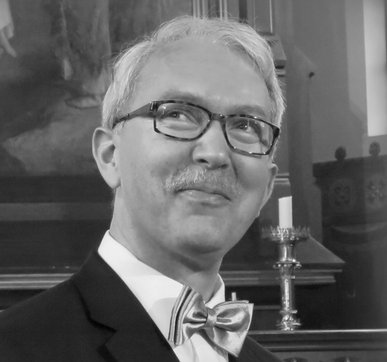 both a virtuoso pianist and a virtuoso organist. Skara is employed by Oslo Metropolitan University.

He has got his own piano festival in the Norwegian capital of Oslo.

Skara has an extremely extensive piano and organ repertoire. He has appeared

regularly on the radio and television both at home and abroad. He has made many

music (Master of Music) at The Norwegian State Academy of Music in 1984. He made his

Brahms-variations from the composer´s time in Düsseldorf sets important claims to the creative talents and clarity of the counterpoint details. Svein Amund Skara mastered his tasks in a solid and convincing way, and with his enormous technical resources he carried out Debussy´s colorful and virtuous "L' isle joyeuse" playfully and unrestrained. Messiaen´s "Vingt Regards sur l'Enfant-Jesus" from 1944 is a very complicated opus as well as rythmically melodic and creative, but Skara delivered the opus with selfassurance and masterly skills which gives him the greatest respect. A positively impressive presentation. Skara demonstrated fully that he is a talent with possibilities to achive greatness.

As an ending of his concert, Svein Amund Skara played Grieg´s Ballade in g minor. Many extraordinary pianists never neglected a chance to show off their instrumental skills in this opus, which this evening´s pianist did as well. But Skara also showed us the Grieg as we see him in the deepest melody language to Vinje´s "Den saerde".

Sunday night Svein Amund Skara performed Messiaen’s monumental and magnificent piano cycle  ”Vingt Regards sur L’Enfant-Jèsus”  in the Concert Hall. It takes time to perform the piece, during the performance the pianist is confronted with one technical challenge after another.  Messiaen is also a thinking musician. The music is not only layered according to complex tone and rhythm patterns. Behind every piece there are strong religious experiences and longings and the performer has to put himself in the composer’s frame of mind to be able to convey his thoughts and feelings through the resounding music. Skara has previously shown that he has considerable technical capacity and on Sunday night he impressed by giving life and form to a piece that puts the performer to the big test. Technically confident and with good control of the resounding instrument, he formed the intricate piece, that also puts great demands on the audience.

Dynamic on the large organ… This music is not easy to listen to, but elegantly and dynamically performed.

The first concert piece was Regers Fantasia on the Choral  „Ein feste Burg ist unser Gott”. Skara used the organ’s resources to the maximum in the many sections of the piece, alternating between soft passages and great heights. …  Trio Sonata in D minor by J. S. Bach  ….In the slow beautiful middle movement, with its unending stream of tones, there was a balance of melody and elegant ornamentation...  K. M. Karlsens Orgelpartita….Interesting piece, well performed... The last piece of the concert,  Regers Symphonic Fantasia and Fugue (Inferno) offered truly picturesque paintings, as well as frightening infernos and some more subdued heavenly visions. In its intensive, complex and diverse fugue theme the piece borders on being free-tonal. Enormous dynamic demands required the organ and the organist to give its all. Skara fully met these demands.

Svein Amund Skara was the soloist on the presentation of F. Chopin´s Concerto for piano and orchestra in f minor, and once more this pianist with his solid technical and musical qualities, showed us why he is considered one of the country´s leading pianists. Together with the orchestra, he recreated much of the energy and dynamics which often lies latent in Chopin´s music. The presentation brought on a highly deserved ovation.

Two organ works gave Svein Amund Skara an opportunity to demonstrate his own artistry. The more satisfying of these was Arild Sandvold's "Introduktion og Passacaglia", a work perhaps too long but rich in textural, harmonic and dramatic variety. Skara maintained fine control and brought out contrapunctal lines with clarity.